To improve neighborhood and residential safety, Cleveland – with the support of its community partners – conducts its annual Gun Buyback.

The City of Cleveland Annual Gun Buyback is held once a year. Check www.clevelandpolicefoundation.org periodically for the date of the next event.

If you still wish to dispose of unwanted firearms, call the police station in your neighborhood for instructions on how to do so. 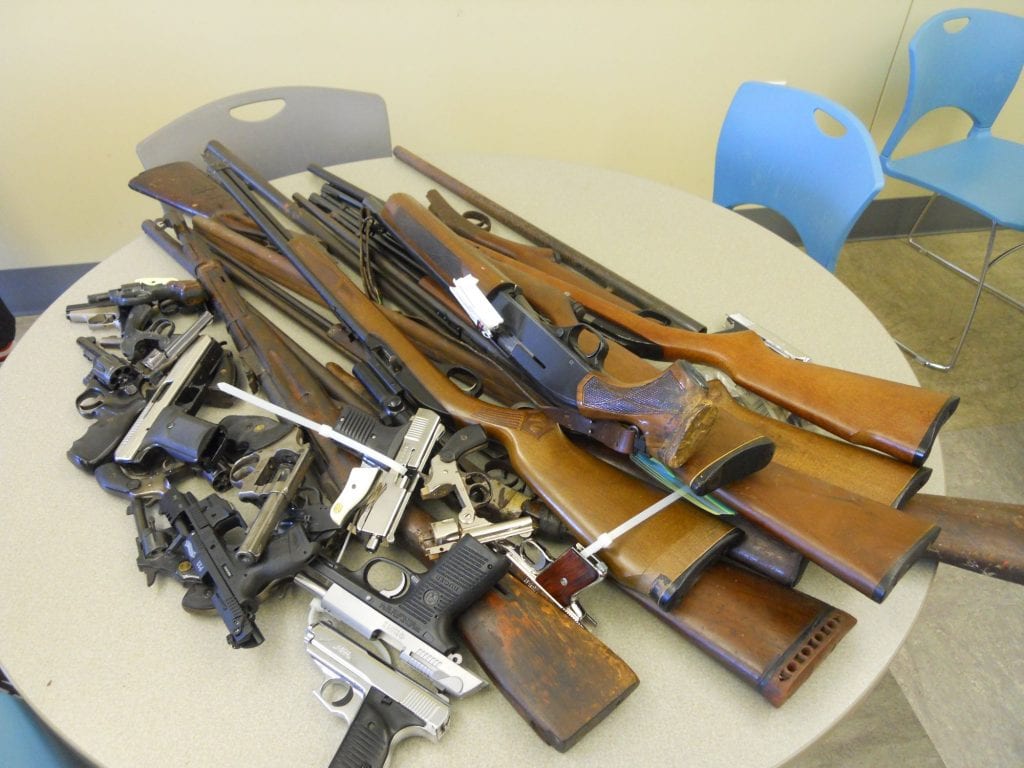 The Cleveland Police Foundation is once again pleased to report on the success of the 12th Annual City of Cleveland Gun Buyback.

Held on Saturday, October 20, 2018 at the CPD 3rd District Headquarters, in just two and a half hours we managed to collect 185 firearms, including 146 handguns and 39 long guns. A victim of this year’s success, the event had to be stopped early after running out of gift cards.

Primarily funded through a generous grant provided by ArcelorMittal to the CPF, the Cleveland Division of Police collected, inspected, catalogued and prepared the firearms for eventual disposal at the ArcelorMittal plant to be recycled into new steel.

The firearms themselves were exchanged for $100.00 gift cards purchased through and donated by our longtime supporters and community partners, Dave’s Supermarket, Target and Tru North Shell.

“The annual Gun Buy Back has successfully taken hundreds of guns off Cleveland’s streets,” said Major Frank Jackson. “Events like this keep guns out of the hands of those who should not have them. It is just one of the many things the City is doing to stop the decline, stabilize our neighborhoods, and make Cleveland safer for everyone.”

To date, the Gun Buy Back has removed approximately 3,300 operable firearms from Cleveland’s neighborhoods.

and our other Community Partners: 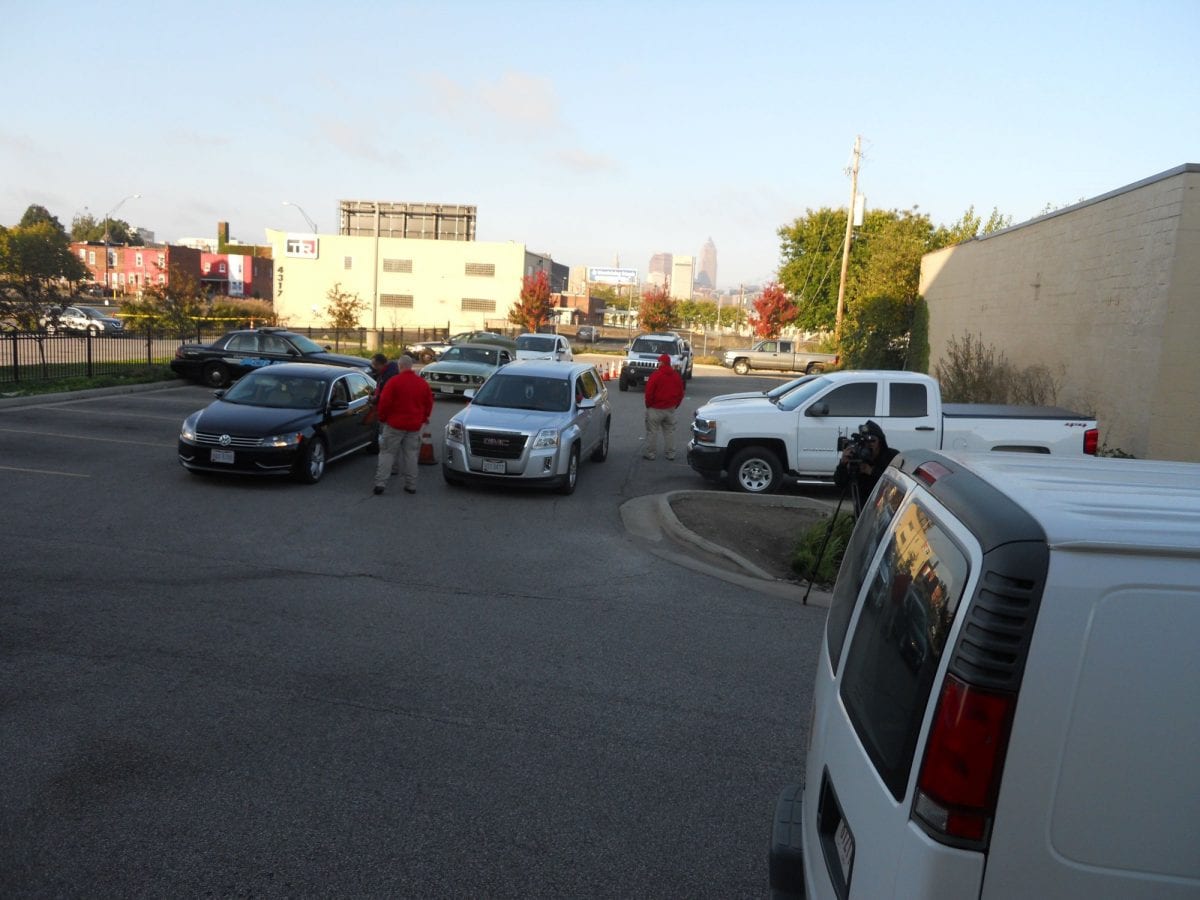 Residents line up to meet with our range ordinance officers 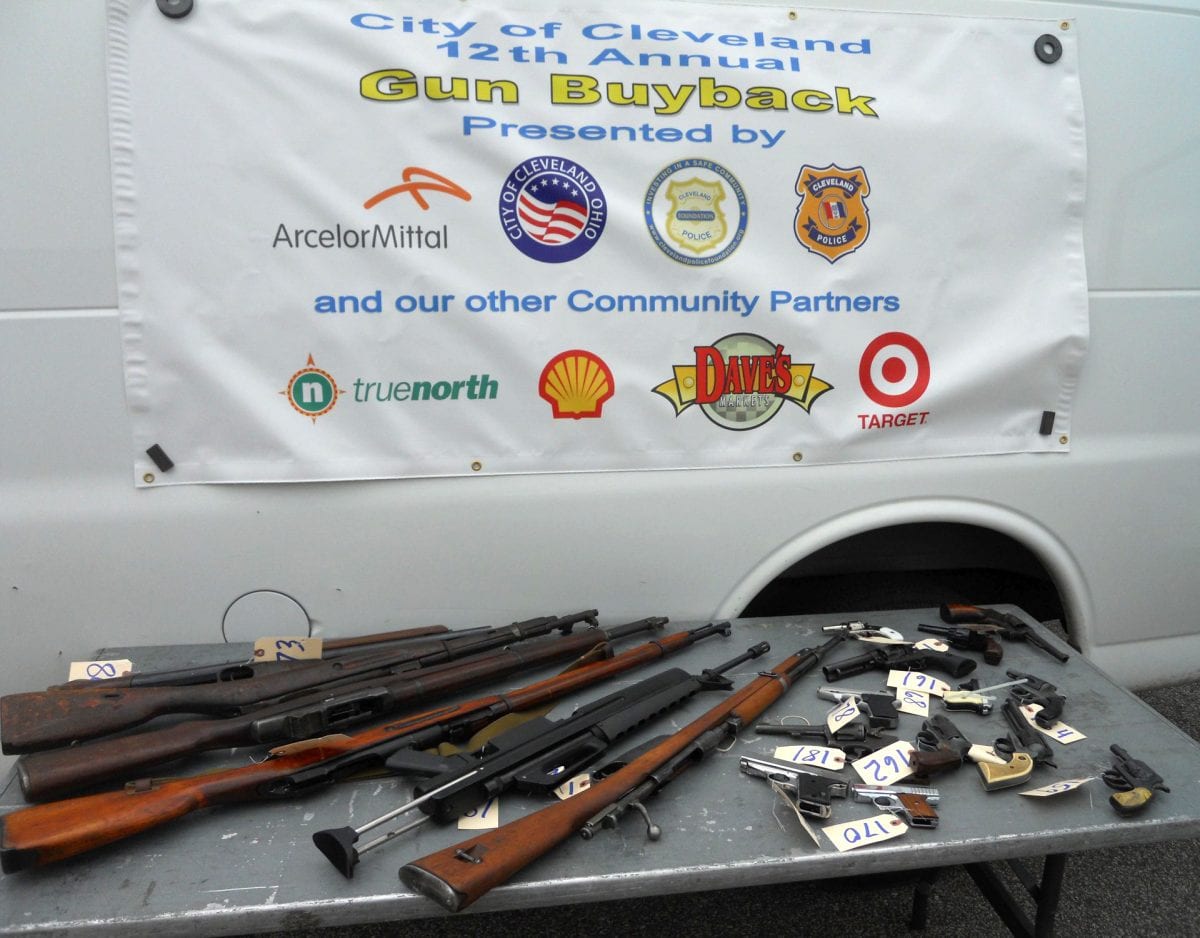 Many thanks to the sponsors and community partners 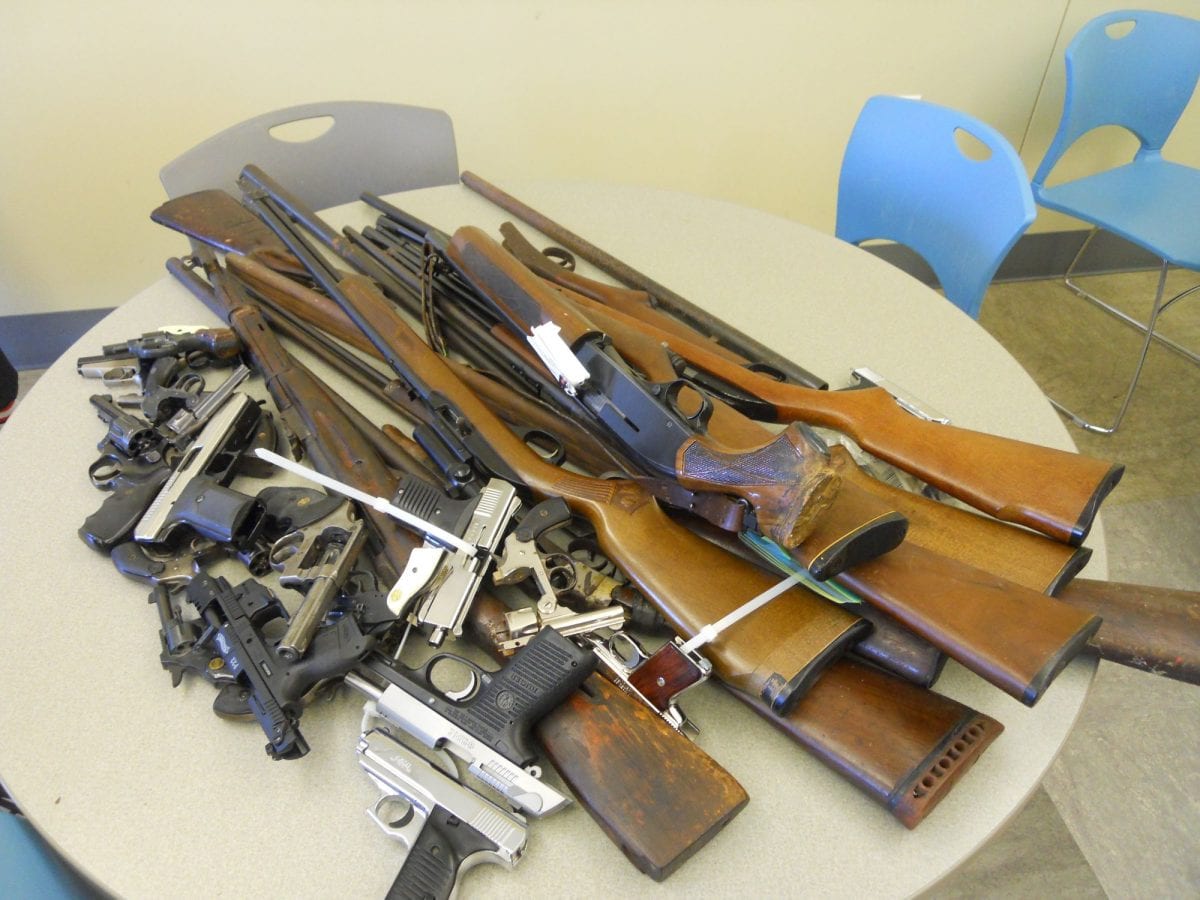 Some of the shotguns were of questionable legality 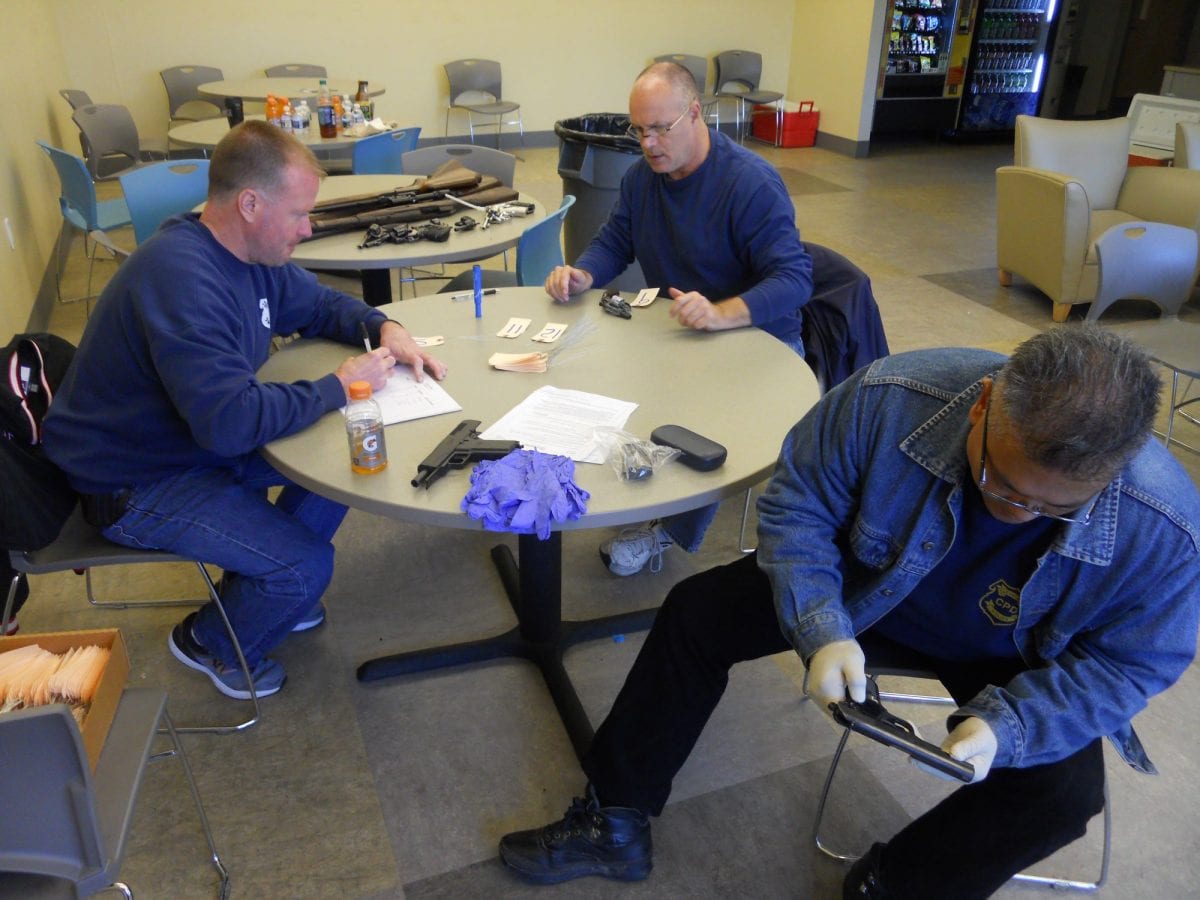 Cleveland Police Officers inspect and tag some of the incoming handguns 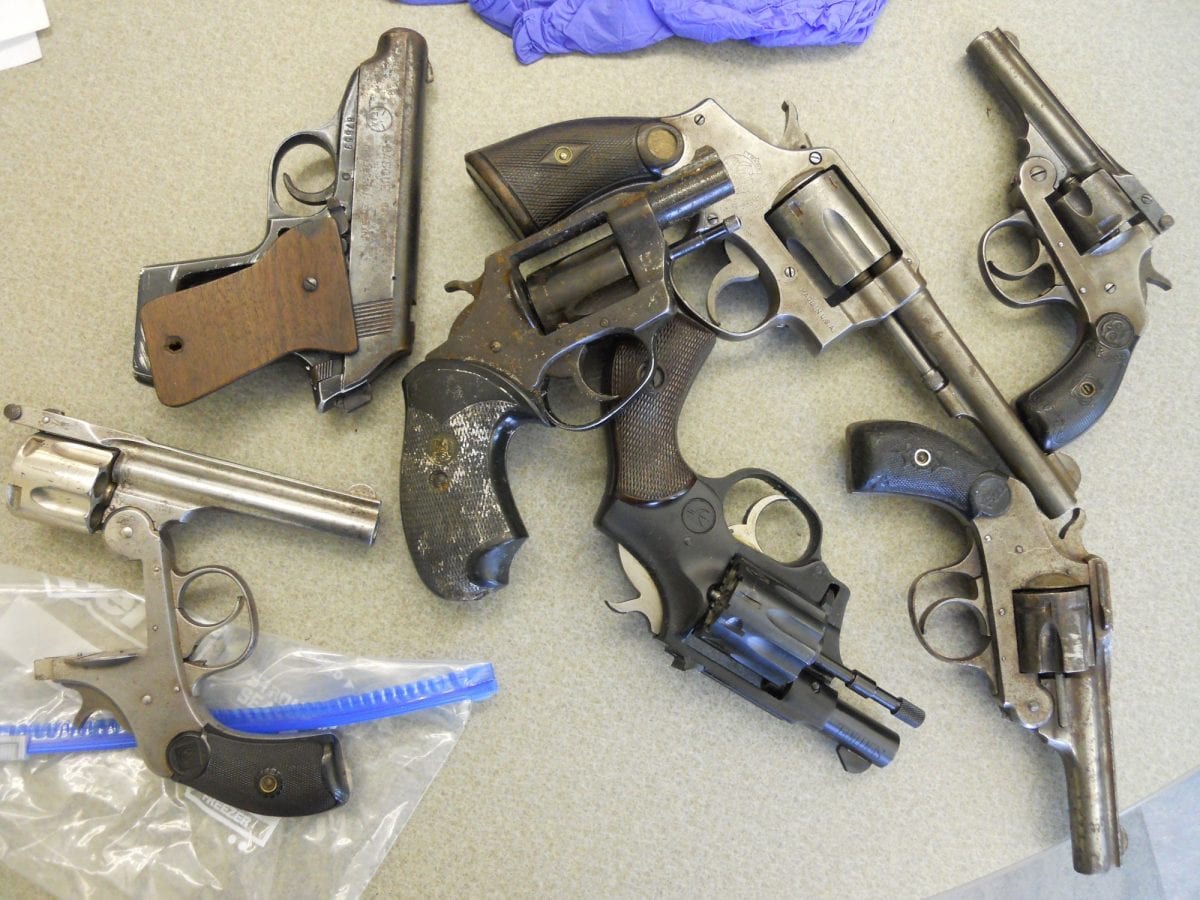 Operable can be a very a broad, but dangerous, category

About the Annual Gun Buyback

In an effort to improve neighborhood and residential safety, the City of Cleveland with the support of its community partners conducts its annual gun buyback.

The program allows citizens to dispose of unwanted operable firearms in a safe, secure and anonymous manner while receiving gift cards and tickets to professional sporting events and leave with the knowledge that the weapons will not fall into the wrong hands … to be used to perpetrate violent crimes or result in accidental injury or death if improperly handled. An added bonus is the weapons are melted down and recycled into steel for producing appliances, vehicles and other household products. 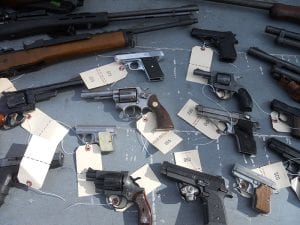 Funding is made available through grants and donations from corporations, organizations, businesses and individuals.

Chief Calvin Williams states, “We know that as a result of this program someone’s life will be saved, and we are encouraged that the police and community are working together to get these guns off the street.”

Since its inception, nearly 3,000 of firearms have been removed from the community.

ArcelorMittal, one of leading steel manufacturers in the world and its employees have been ardent supporters since the program’s inception, providing grants to allow for the purchase of gift cards to “buy” the firearms, and also melting them down into recycled steel at its Cleveland mill. 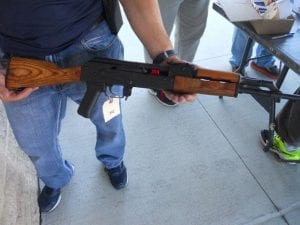 On behalf of the entire community, our sincere thanks to ArcelorMittal and all our community partners supporting the mission of the CPF.

A member of our staff is happy to discuss how you, your company, or foundation can invest in making our community safer. To learn more about our programs and giving opportunities, please contact us at 216-623-3333, or via email.

“I never wanted a gun in my house. When my husband died, I didn’t know what to do with it. Now it’s going to good use by getting me some gas for my car.” - Anonymous

"My sincere thanks to ArcelorMittal, their employees and all of the community partners who made donations to the Cleveland Police Foundation making it possible to host this program." - Mayor Frank G. Jackson

“We know that as a result of this program someone’s life will be saved, and we are encouraged that the police and community are working together to get these guns off the street.” - Calvin Williams, Chief of Police

"The buyback is but one method used to reduce violent crime and injury from firearms. Others include educating the public to be responsible gun owners by practicing proper safety and security measures and arresting criminals who use firearms to perpetrate violent crimes through proactive law enforcement initiatives." - Charles W. Lane, Jr., Executive Director, CPF

“I am very glad I found an outlet to get rid of this gun so I don’t have to worry about it getting into the wrong hands.” - Mr. Kevin Chapman, Cleveland Resident

"This is a great program because it gets guns off the streets which will benefit not only the citizens in the neighborhoods, but our officers as well.” - Steve Loomis, President of the Cleveland Police Patrolmen's Association.

“Steel is the most recycled product in the world. It’s good to know that these weapons will be put to good rather than violent use.” - Eric Hauge, ArcelorMittal VP and General Manager