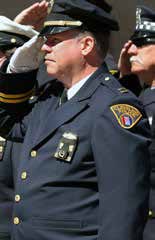 Since its founding as a frontier outpost of the Western Reserve, Cleveland has been a great place to live. As our city and northeast Ohio continued to grow and prosper, its citizens established a great sense of community, one in which to raise a family and make a good living… a community we can all be proud to call home! Our police officers are an integral part of that community, protecting its citizens and their property. They can’t do it alone, as every citizen plays a role in making our neighborhoods safer. The Cleveland Division of Police has a proud and storied history of service. Members put their lives on the line every day for their fellow citizens. Since its inception, 110 Cleveland Police Officers have died in the line of duty. Needless to say, its officers are committed to doing their part in working to make our community safer.

The CPF is an alliance of business and civic leaders, law enforcement organizations and individuals committed to the ideal that an educated, well-trained, and modernly equipped law enforcement agency leads to a safer community for all. Our mission is to strengthen the bonds between the Cleveland Division of Police and the citizens it serves, working together to make our city safer for all. To accomplish that goal, the CPF works proactively to support and invest in programs, community policing initiatives and engagement, events that foster stronger relationships between citizens and police officers, and police charities. The Cleveland Police Foundation was incorporated July 7, 2005 and became the reality of police officials and civic visionaries after they identified a need to support the Division of Police for the City of Cleveland and the numerous activities they conduct on behalf of the community. Acting on the advice of three local civic leaders, Thomas D. Ganley, Edward A. Lozick, and Samuel H. Miller, Police Chief Michael McGrath created an organization that held their collective dreams. Their vision, desire, and determination led to an organization that positively impacts the Division of Police and their endeavors to engage the community, to create opportunities for collaboration with neighborhoods, children and adults, and to be an integral part of the fabric of the community. The CPF proudly supports the following charities in fulfillment of their missions: Cleveland Police Athletic League, Cleveland Police Historical Society & Museum,  Cleveland Police Pipes & Drums, Cleveland Police Honor Guard, the Cleveland Mounted Unit Charitable Trust and Cleveland Cops For Kids.

We were blessed to have had these amazing individuals as part of the CPF family. We will miss them and honor their memory.

“Being the father of a police officer and having served in the US Coast Guard, the Department of Homeland Security, and in support of veterans and their families, it is an honor to become a member of the CPF Board. Though our supporters may not wear a badge or carry a weapon, we holster a big heart in making Cleveland a national leader in police-community relations.”

"The Cleveland Police Foundation builds police-community bonds through fun activities, influences the future of local teens, helps those in need, and strives to increase police morale. Being a part of this great organization instills hope and is a source of pride!"