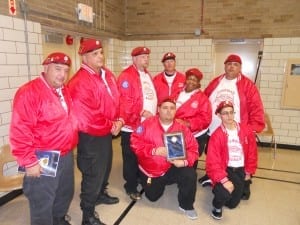 The Second District’s Police Community Relations Award Ceremony was held this past Thursday at OLA/ St. Joe’s Center and unlike last year there was no snow storm to contend with so I was able to attend. The evening began with a very delicious meal provided by the Community Relations Committee, and enjoyed by everyone. Upon completion it was time for the award presentation and in attendance to honor the recipients were Mayor Frank Jackson, Safety Director Michael Mcgrath, Chief Calvin Williams, and many other city dignitaries. Along with the Officers, and citizens receiving commendations from the Division of Police, and Councilpersons, I had the honor of representing The Cleveland Police Foundation and handed out our Community Service Awards to an Officer, citizen, and organization that goes beyond the call of duty. The Second District Officer chosen to receive our Community Service Award was Detective David Santiago who is a highly decorated veteran that has served the citizens of the Second District with honor and distinction for nearly 30 years. His dedication, consistency and integrity signify his professionalism and makes him deserving of this recognition. Our citizens receiving the Community Service Award were Cyndi, and Destiny Rice who are residents of the Second District, and dedicated members of the Second District Police Community Relations Committee. They faithfully volunteer at Committee events and are regulars at the Second District Police Station grilling food for the Officers, or dropping off pans of brownies, cookies, or cupcakes just to say ” Thank You ” to the men and women on duty. These two ladies are also responsible for starting the Hank Adkins Hero Fund which will assist any Cleveland Police Officer that suffers from a chronic or debilitating injury. Officer Adkins was a retired First District Officer that recently passed away from ALS and this dynamic duo vows to keep the Hank Adkins Hero Fund going in honor of his memory.

Finally The Cleveland Police Foundation recognized the Guardian Angels who are made up almost exclusively of volunteers that donate their time, and energy to make the neighborhoods of the Second District safe. The members of the Guardian Angels live and work in the very neighborhoods in which they volunteer, giving back to the community on a daily basis. A big ” Thank You ” and ” Congratulations ” to all the Officers and citizens of the Second District that received recognition on this very special night, and your dedication, and devotion to your community is appreciated by all……..Bob Guttu ( Cleveland Police Foundation )