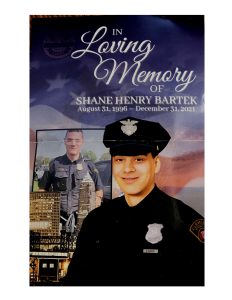 It was indeed a sad and solemn day, Tuesday January 11, 2022 as Patrol Officer Shane Bartek was put to rest after being murdered in a carjacking incident on the westside of Cleveland.

The morning started with a memory-filled dedication ceremony to Shane held at Grace Church in Middleburg Heights.  Attended by many of his relatives, friends, and fellow officers from around the state, tribute was paid for the sacrifice made by this 25-year-old police officer.

Upon completion of the service, the body of Officer Bartek was accompanied by numerous police and personal vehicles to his final resting place at Holy Cross Cemetery.  What was truly impressive about taking part in this procession was to see the large number of First Responders at attention and individuals from the community along the route.  As people held both United States and Blue Line flags, everyone braved the extreme cold to honor one of Cleveland’s Finest.

Thank you, Patrol Officer Shane Bartek for your service and rest assured you will never be forgotten!