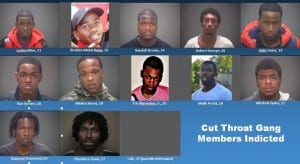 Acting on evidence gathered by the Cleveland Division of Police Gang Impact Unit, a Cuyahoga County Grand Jury has indicted 12 adult members of the Cutthroats, a violent street gang that operated in Cleveland’s Glenville neighborhood, on RICO charges and for participating in criminal gang activity. A 13th gang member faces charges in a complaint filed in Cuyahoga County Juvenile Court.

Twelve of these 13 defendants are now in custody. Search warrants executed during Thursday’s takedown by a task force of Cleveland Police officers, FBI agents and U.S. Marshals produced guns, ammunition and other evidence that will soon lead to additional indictments including charges stemming from a vicious December 27th attack on an individual at a McDonald’s drive through near East 105th Street and St. Clair Avenue. Read more….