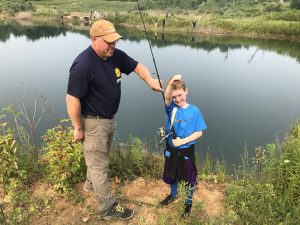 The Blue Heron Preserve in Burton Ohio hosted kids from the westside recreation centers as well as Cleveland PAL.  Cleveland police officers from all five districts joined together and interacted with the kids in a positive way.  Even though the humidity was sky-high and the temperature climbed, the bluegills and bass were biting and had a feast on the worms that were being cast at them!

Upon completion of fishing, the group enjoyed a box lunch and door prizes as well as a gift card award for the longest fish.  As the kids departed, each was given a fishing rod combo, a tackle box, and the satisfaction of catching a fish!

A big thank you goes out to all the patrol officers and kids that took part in this event.  Also helping out were Cleveland Councilman Brian Kazy, retired Sergeant Bob Kumazec from PAL, our Cleveland Police Foundation Executive Director Rick DeChant, board member Woods King and administrator Marilyn Jech.  Finally, a big thank you to Matt Zone, Senior Vice President of the Western Reserve Land Conservancy and his staff for providing the venue and assisting big time at this event!