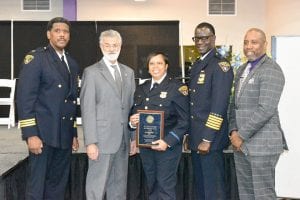 An enthusiastic crowd was present to help honor both citizens and police officers from the Fifth District community who went beyond the call of duty.

On hand to honor these recipients were Mayor Frank Jackson, Chief Calvin Williams and numerous members of the Cleveland City Council and Administration.

Upon completion of the awards presentation, a fine meal was provided by the Fifth District Community Relations Board.

Congratulations to all the recipients and thanks to all the family, friends, and citizens from the community that attended and made this event a success.