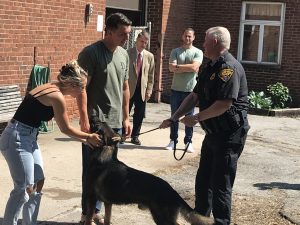 James Karinchak started at the Mounted Unit (where he rode a horse) and saw a training demo with the K9 Unit.  Thanks to CPF Board Member Woods King III for being on hand to provide a great history of the Mounted Unit.  CPF Community Partner Coordinator Bob Guttu presented James with a CPF T-shirt and a CPF miniature badge.  James immediately changed into the T-shirt and wore it all day.

Next stop was Cleveland Police Headquarters where he met with Homicide, Crime Lab (where he got to shoot into the ballistics water tank) and the Police Museum.  A stop was also made at the Chief’s Office where Deputy Chief Joellen O’Neill presented James with a miniature Rock-n-Roll Hall of Fame CPD guitar.  Chief Williams could not join us as he was in a meeting with the US Marshalls but sent his thanks and regards.

From headquarters it was on to the Fifth District for a cookout, then the Third District (where Karinchak assisted with roll call), and Central Dispatch.  The rank and file were very appreciative of the visits.

And every unit visited received a stack of the CPF Annual Campaign Vision ‘21 flyers for distribution to the rank and file.  They also received a quick overview of the initiative from CPF Executive Director Rick DeChant.

James Karinchak is donating $50 to the Cleveland Police Foundation for each of his strike-outs.  With 71-SO to date, the total is now $3550 with over $1,000 donated through the CPF website link by fans.  To donate:  https://pledgeit.org/whiffsforwarriors

Thank you James and fans!!