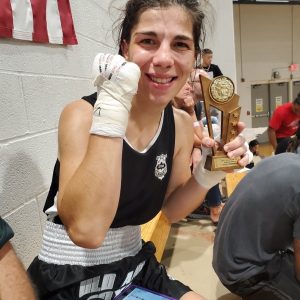 Old Angle P.A.L. boxing gym has been very busy over the last few months and we have some exciting fight updates to share with the fans.

On September 25 as we traveled to and competed in Pittsburgh, our 152 lb. female Golden Glove champ Danielle fought a tough fight but lost a close decision.

The following week on October 2nd, we traveled to Buffalo, New York.  Our first fighter was 15-year-old Jaiden, at 125 lbs.  He fought a great fight but unfortunately lost a very contested decision.

On November 6th at the Historic Slovenian home in Cleveland, Josh our super heavyweight Golden Glove champ, took to the ring again and scored a third round knockout against a very strong opponent from New York!

A big hurrah to all our Cleveland PAL contenders!