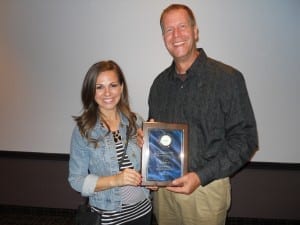 Sara Carnes, and Len Howser of 95.5 ” The Fish ” proudly display their plaque.

The Annual First District Police Community Relations Award Ceremony was held on November 4, 2015 at St. Mary’s Cathedral on Warren Road, and I attended the event representing The Cleveland Police Foundation. This event honors citizens, and Officers from the Cleveland Division of Police First District that go beyond the call of duty while performing their jobs. The M.C. for the night was Commander Tom McCartney, assisted by Sgt. Bo Diaz, and also in attendance to honor these special people were Mayor Frank Jackson, Safety Director Michael McGrath, Chief Calvin Williams, Community Relations Board Director Blaine Griffin, and numerous residents of the First District Community. The Cleveland Police Foundation was honored to present the following Officer, citizen, and organization, with our Community Service Award. P.O. Charles Russell #1559 was recognized for his diligence to duty, and dedication to the Community, and The Cleveland Division of Police First District. Longtime First District resident Rita Fryberger received her award for being a real Community Activist, and caring not only for her neighborhood, but for the people that live there. Rita attended the Citizen’s Police Academy when I was in charge of it years ago, and was always the “go to” person whenever I needed help with something. Our final Community Service Award went to Len Howser, and Sara Carnes, of 95.5 “The Fish” Radio for their commitment to the Community, and to the Officers of the Cleveland Division of Police. Their Random Act of Kindness idea has really taken hold locally, and continues to grow. After the awards were presented everyone enjoyed a delicious meal provided by the Community Relations Committee. Thanks to all that attended, and special thanks to all the citizens, and Officers that were honored on this night, and keep up the good work. Also thanks go out to Bellaire Puritas, Kamm’s Corners, and Westown Community Develoment Corporations, and St. Mary Romanian Orthodox Cathedral……….Bob Guttu (Cleveland Police Foundation)