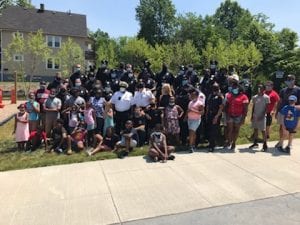 On Monday, July 6, 2020 a pizza and ice cream social event was organized by Captain Keith Sulzer and held at Officer Derek Owens Memorial Park. What made this gathering extra special and bittersweet was that due to his impending retirement  it was going to be his final event as a member of the Cleveland Division of Police.

A fine crowd of citizens including Mr. & Mrs. Owens (Derek’s parents), kids and officers were on hand to share this very special day with this very special Police Officer who touched the heart and soul of so many people throughout the City of Cleveland!

Whether it was building the Derek Owens Park, replacing a bike for a child that had theirs stolen, cooking pancakes for the seniors, or visiting the children that were confined to Metro Hospital, Captain Sulzer always made it a point to make the day special for these individuals. Thank-you speeches were made by many individuals including Councilman Ken Johnson, former City Council President Jay Westbrook, Kim Fields and of course Mr. Owens.

Captain Sulzer thanked everyone for their support including his wife and two of his three sons in attendance. He then gripped his police radio where a dispatcher called him in for relief for the final time.

Although I didn’t have the pleasure of working with Captain Sulzer on the job as an officer with the C.P.D., I did get to work with him with the Cleveland Police Foundation. The captain was the Liaison Officer and I was amazed at his dedication and devotion – not only to the citizens of the City of Cleveland but to our Heroes in Blue. He also was a believer in the Community Policing concept and encouraged other officers to believe in it also.

You will be missed Captain Sulzer! Good luck in the future, My Friend!