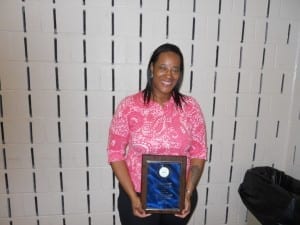 The Third District Police Community Relations Committee Awards Program was held Tuesday evening (November 17th) at the Fatima Family Center. This event is held yearly to recognize Police Officers, and citizens from the 3rd District that have gone beyond the call of duty while performing their jobs. The M.C. for the evening was Channel 19 ‘s Morning News Anchor Tia Ewing, and was assisted by Third District Commander Patrick Stephens, and Sgt. Bryan Curry. Also in attendance for the event was Mayor Frank Jackson, Chief Calvin Williams, Director of Public Safety Michael Mcgrath, and numerous other dignitaries. I attended the ceremony to present The Cleveland Police Foundation’s Community Service Awards, to honor  an Officer, citizen, and business, or organization that strive to make the Third District Community a better place to live. The Officer receiving C.P.F. Community Service Award was P.O. Dearel White #1830 who excels in the performance of his daily duties, and is a model C.P.D. Officer. Our citizen that received the Community Service Award was Lametris Joiner, a Community Activist, dedicated member of the Community, and a mentor to the children in her neighborhood. She is also a volunteer at both Thurgood, and Glenville Recreation Centers. Our final Community Service Award went to Burt Saltzman, proprietor of Dave’s Supermarket, who never hesitates to give back to his Community, and has always been a supporter of the members of the Cleveland Division of Police. After the awards were presented a delicious meal was provided by the members of the Community Relation’s Committee. On behalf of The Cleveland Police Foundation I would like to congratulate all the Officers, and citizens that received recognition on this very special day, and we are very proud of every one of you….Bob Guttu (Cleveland Police Foundation) 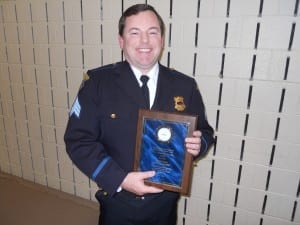