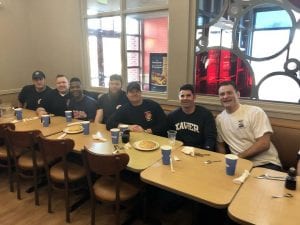 For the tenth straight year, Cleveland Division of Police and Cleveland Fire have faced off at the Steelyard IHOP’s Pancake Eating Contest.  This is to kick-off IHOP’s free pancake event benefitting The Children’s Miracle Network and Rainbow Babies and Children’s Hospital!!

Cleveland Police pulled out all the stops this year and brought in former UFC Heavyweight Champion Stipe Miocic but still came up short!!

The big winners for the day were Cleveland Fire and The Children’s Miracle Network as Cleveland Fire’s Local Union 93, the Cleveland Police Patrolman’s Association, and Cleveland Cops for Kids donated $750 to the charity!

A big thanks to Steelyard IHOP, owner Dan Campbell and staff, radio personality Mark “Munch” Bishop, Stipe Miocic, and all the competitors for participating for a great cause!!