Greater Cleveland is blessed to have so many amazing people who are willing to donate their valuable time and talent in giving back to the community, thus making our little corner of the world a better place to live. The Cleveland Police Foundation is most fortunate to have a corps of such individuals willing to support its mission.

In each newsletter edition one of our board members will be featured. To meet our entire board and staff, see our mission and board page. Today, we introduce Jim Craciun, Secretary. 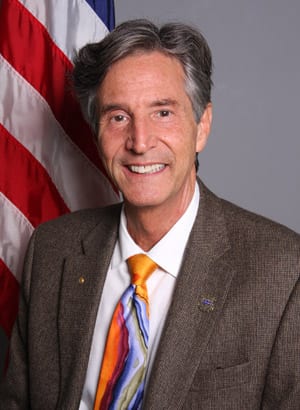 In this edition of “The Partner” we are honored to feature James M. Craciun, one of the original members and current Secretary of the Board of Directors of the Cleveland Police Foundation.

When asked why he serves on the board of the CPF, Jim stated, “Our police officers have a very tough and dangerous job. It’s an honor to be part of an organization that supports and helps them in their work in the community.”

In 1974, a Catholic priest asked him to smuggle bibles and catechism books into Communist-ruled Romania. Jim agreed, and that experience began his lifetime advocacy for religious freedom and human rights.

In 1977, he attended the International Human Rights Conference at the Royal Holloway College in London, England and helped draft and sign a memorandum condemning the Helsinki Accords. The same memorandum was prepared and signed simultaneously in Romania by courageous dissidents who were later imprisoned for their act.

Jim began public speaking in 1982 as a member of the Metropolitan Speakers Bureau of Northeastern Ohio; his topic, “Life under Communism.” Father John Cregan, Cleveland Police Chaplain, was so impressed with his story he invited Jim to be the guest speaker for the Police and Fire Holy Name Society annual breakfast at the Hollenden House Hotel.

During the early 1980s, Jim was a founding member of the Ohio Committee in Support of Solidarity for the Polish people, and all people seeking freedom from the tyranny of communism. He was co-chairman of Ohio Committee to Renounce Yalta during 1983 and 1984. In 1986, he coordinated a national demonstration of Romanian Americans in Washington D.C. against the Most Favored Nation status for communist Romania.

He was a founding member of the World Union of Free Romanians (WUFR) in 1984 at the University of Geneva in Switzerland, and in 1987 he was elected Vice President of WUFR at the second World Congress held in Paris, France. He was re-elected in 1991 and 1996 in Paris, and again in 2000 in Bucharest, Romania. In January 1995 he advised the Clinton Administration on the expansion of NATO, representing the Romanian American perspective.

From 1985 to 1991, he was a member of the executive board of the Diocesan Union of Holy Name Societies for the Catholic Diocese of Cleveland, and served as president from 1989-1991. During his tenure, he chaired an anti-pornography campaign that stopped local convenient stores from displaying adult magazines in plain view where children could see them.

Jim’s other civic endeavors are extensive and include:

In 2006 Jim ran unsuccessfully for State Senate of Ohio in District 23.

On December 15, 2007, Jim was honored to receive the Freedom Award from the American Nationalities Movement for his contributions to world peace, commitment to human rights, and service to the community.

His professional career started in 1976, when he became a licensed funeral director where he worked in the family business, first with his father and then with his brother Joseph. They managed the Craciun Berry Funeral Homes of Cleveland and Westlake, Craciun Funeral Home of Middleburg Heights, and Corrigan Craciun Funeral Homes of Cleveland and Fairview Park. After 40 years in the business, including his apprenticeship, Jim retired in 2014.

He and his wife Marcy were married for 30 years and the proud parents of five children. Sadly, she passed away in November 2010.

Jim is very proud of his children. His oldest, Noelle, has a MEd in clinical counseling and is married to Jake Fitzpatrick of Hometeam Marketing. Together, they gave him his first grandchild, Francesca on September 4, 2013.

Oldest son Jason, an award-winning agent with New York Life Insurance, is married to Monika. She gave birth to Emelia, his second grandchild, on November 13, 2014. Next in line is Jonathan, who is now a licensed funeral director, and as of 2014, a third generation member working in the family business. Along with his cousin, Joe’s daughter Alexandria, they are carrying on the fine family tradition.

Son Jesse is a freshman at Cleveland State University, and youngest son Nicolas is a junior at Saint Ignatius.

Our sincere thanks to Jim for his service to, and passion for the Cleveland Police Foundation, our City…. and the world!