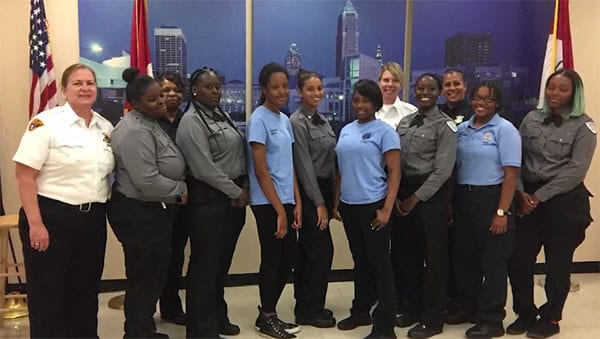 This summer, the Cleveland Police Foundation hosted 60 high school students in its newly created Law Enforcement Career Pipeline Program (“Pipeline Program”) to support the Cleveland Division of Police in its recruitment efforts to increase the number of women and minorities in law enforcement.  During the 5-week program, students participated in Tri-C’s Public Safety Youth Academy where they received a taste of police academy training, as well as training in Fire and EMS. 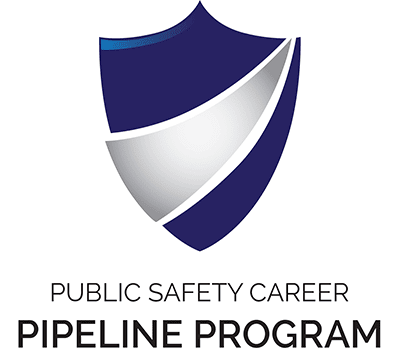 Over the course of three weeks at Tri-C, students learned things like proper radio communication, traffic control, ethics, constitutional law and search-and-seizure tactics. The training was consistent with what they would receive in the real police academy. During the next two weeks, students applied their training in the real world through field experience which rotated them through divisions of the Cleveland Police Department, the Greater Cleveland Regional Transit Authority Police Department (RTA) and NASA Glenn Research Center’s Office of Protective Services.  While with the Sex Crimes Unit, students reviewed the statutes governing sex crimes and learned how something as simple a sexually explicit photo can lead to prosecution. Pipeline participants also received training in judgmental/use of force scenarios utilizing the RTA’s Shoot House Simulation System and NASA’s Meggitt BlueFire weapon simulator. During taser training at RTA, one student quickly realized an error made during the use of force simulator. He commented that he wished they would have had the taser training beforehand. While trying to make a quick decision on which weapon to use, he improperly fired the taser at the suspect’s neck. While at NASA, students also had an opportunity to receive hands-on training in defensive tactic scenarios, including handcuffing, and use of less lethal weapons.

To connect the work of law enforcement with the judicial system, students spent time with Cleveland Municipal Court Judge Michael Sliwinski and Cuyahoga County Juvenile Court Judge Michael Ryan learning about the perspective of the judges and how law is applied in various matters. In a drug case whereby students served as Prosecutor and Public Defender, one student vehemently argued that jail time was not the appropriate disposition for her client, but treatment.  In later discussions with Judge Sliwinski, she learned about Cleveland’s Drug Court and reaffirmed her view that the Court should provide treatment when possible. With Judge Ryan, students observed the active disposition of cases affecting youth their age, and discussed the importance of school and how engaging in positive programs such as the Pipeline can in keep students out of the juvenile court system. Judge Ryan shared his personal story of overcoming his challenges and encouraged students to write their own stories of overcoming their circumstances.  Adding to their experience, students met with Acting U.S. Attorney David Sierleja and his team to learn about the Consent Decree, as well as how the federal government partners with local agencies to improve public safety and federal vs. local jurisdiction, and discussed various cases to apply that knowledge.

Students culminated their experience at Hiram College, where they spent three days in the life of a college student.  In a college level genetic diversity lab, students learned how genetics is applicable in law enforcement, particularly in the area of forensics. They also met with the Admissions Department to learn about admissions requirements and financial aid. Recognizing the wellness challenges of law enforcement officers, students had the unique opportunity to work with Rebecca Reynolds to learn some mindfulness practices such as silencing the mind, breathwork, mudras, acceptance practices and visualization.  Students concluded their retreat at the Northeast Ohio Medical University with a tour and discussion about the vast opportunities at its facility.

The students were greatly appreciative of the experience and networking opportunities presented by the Pipeline Program. One student’s takeaway was that he learned a lot about things he would have never been exposed to.  He became so emotional in recapping his experience, he fought back tears. Most of the participants plan to pursue a career in law enforcement. 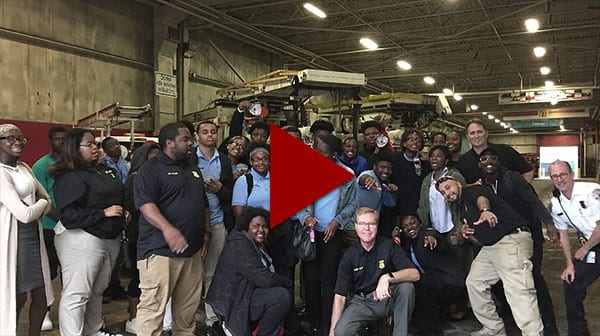 More about the Pipeline Program…