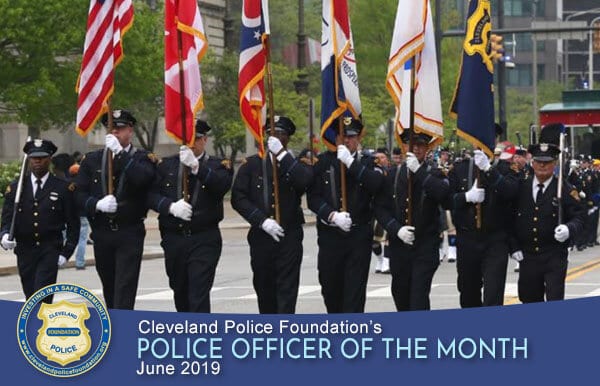 The Cleveland Police Honor Guard ensures that all appropriate courtesies are rendered at the funerals and memorial services for active and retired police officers, especially those who have died in the line of duty. Additionally, they represent the Cleveland Division of Police at civic functions, parades, and sporting events by serving as its color guard, and with precision marching and drill routines.

During their recent trip to Washington D.C. for 2019 National Police Week, the Cleveland Police Honor Guard had the honor of escorting the family of recently deceased CPD Officer Vu Nguyen during the candlelight vigil, as well as other families as they departed their buses. On National Police Officers Memorial Day they stood with thousands on the Capitol lawn for the official service and address by President Trump and other dignitaries.

When asked about the Cleveland Police Honor Guard, member PO Tom Ross stated, “It is critical that an agency the size of Cleveland has a presence at National Police Week every year. When there is a line of duty death in Northeast Ohio our Ceremonial Unit is often one of the first resources requested to assist that agency.”