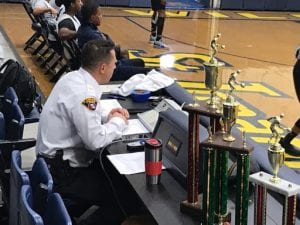 On hand to participate were teams from the police departments of Elyria, Mentor, the FBI, Ohio State Patrol and Cleveland. It was a very competitive atmosphere and physical at times but mutual respect from all teams was prevalent. In the end, the winner’s trophy was awarded to the team from Elyria who outlasted Team FBI. Also in the winner’s circle were the local hunger centers who received canned donations and 100% of the monetary donations.

When asked about the tournament, Community Policing Commander Johnny Johnson stated “This was a very successful event considering it was our first time putting the tournament together and we would like to be able to invite more teams next year and really help the hunger centers even more.”

A big thanks goes out to all the teams that participated, all the volunteers and the following sponsors, Setta Trophy, Adlers, CPPA, Black Shield Club, Cleveland Food Bank and the Cleveland Police Foundation. See you all next year!