Removing Guns From the Neighborhoods 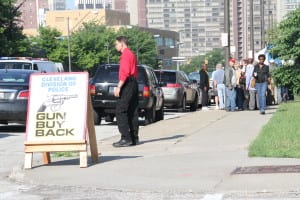 Citizens lined-up to turn in firearms in exchange for Dave’s Supermarket, Shell/TruNorth or Target gift cards, Cleveland CAVS, Lake Erie Monsters tickets, and a chance at a $1,000.00 raffle grand prize. 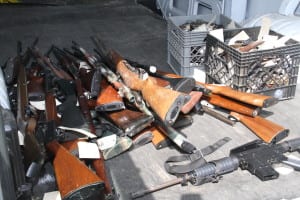 A total of 352 firearms were turned in, including 311 handguns and 41 long guns. 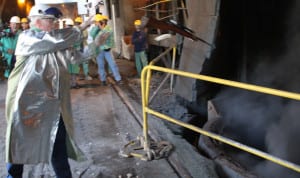 The 2013 City of Cleveland/ArcelorMittal Gun Buyback was a huge success!  A total of 352 guns were turned in, including 311 handguns and 41 long guns (assault rifles, shotguns and rifles).

In early May, Mayor Frank G. Jackson and Chief of Police Michael McGrath announced that the 2013 City of Cleveland Gun Buy-Back would be held on Saturday, June 15, 2013. The purpose was to get as many handguns and assault rifles out of the neighborhoods so they could not be used in the perpetration of violent crimes.

Chief of Police Michael McGrath said at the time “This is a strategy the City of Cleveland and the Division of Police have employed for several years. As a result of the Gun Buy-Back, someone’s life will be saved.”

“ArcelorMittal is proud to partner with the Cleveland Division of Police and Cleveland Police Foundation on the Gun Buy-Back program. It is a natural extension of our commitment to make our city a safer place for our employees and neighbors. After the guns are collected, we are pleased to melt down the weapons and recycle them into new steel which will eventually become consumer goods that improve the quality of all our lives,” said Eric Hauge, Vice President & General Manager, ArcelorMittal Cleveland.

CLEVELAND – On Wednesday, October 9, 2013, the City of Cleveland and ArcelorMittal Cleveland will hold a gun melt to recycle more than 352 guns that were surrendered at the 2013 City of Cleveland Gun Buy-Back. On Saturday, June 15, 2013, citizens exchanged firearms for gift cards in addition to tickets to an upcoming Cleveland Cavaliers and Monsters game and an entry into a raffle for a chance to win up to $1,000.

This year, ArcelorMittal Cleveland is celebrating one hundred years of steelmaking in the industrial valley. For a century, the steel industry has had deep roots in the Cleveland community, and we share a common goal for a healthy, safe, sustainable city. We are pleased to continue our partnership with the City of Cleveland and Cleveland Police Foundation,” said Eric Hauge, Vice President &  General Manager, ArcelorMittal Cleveland.

Following a media briefing, the guns will be placed into the No. 1 Basic Oxygen Furnace iron ladle and will be melted by approximately 200 tons of molten iron, at temperatures of about 2,400 degrees Fahrenheit. The molten iron, along with scrap, is then charged in the basic oxygen furnace to make steel which will eventually be used to manufacture cars, household appliances and other goods.