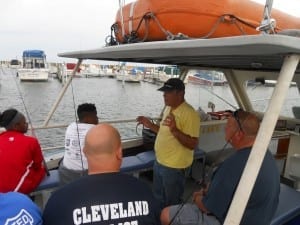 On Tuesday July 21, 2015 the annual Fourth District Cops/Kids Fishing Outing was held at Cleveland Metropark’s Wildwood Park. The day dawned cloudy, and a bit chilly as the kids from The K.N.O.W.L.E.D.G.E. Program, and the Cleveland Division of Recreation began arriving along with the officers from the Cleveland Division of Police Fourth District’s Community Service Unit. After boarding the Linda Mae, and Express Charter Boats the participants were briefed by Captain Vytus Ki…jauskas, and his crew on safety, and how to use the rods and reels, after which the boats headed out for the morning’s excursion. After a few hours of good fishing, and interaction between the officers and the kids the boats headed in for lunch with the hot dogs grilled by Captain Keith Sulzer of the Community Policing Unit, and served by Patrol Officer Sam Anderson. As the food was being devoured by a hungry group of officers and kids, it was clearly obvious by the discussion among the participants that a good time was had by all, and that we may see most of the same faces next year. Joyce Hood, the Director of the K.N.O.W.L.E.D.G.E. Program stated it the best when she said ” Thank you to The Cleveland Police Foundation, and all the Officers involved for inviting the children, some of whom had never been on a boat before this opportunity”. The Cleveland Police Foundation would like to thank he following sponsors for making this event a success, Saint Luke’s Foundation, Ganley Auto Group,  Samuel and Maria Miller Foundation, Edward and Catherine Lozick Foundation, KNRZ ESPN 1540, Forest City, ArcelorMittal, All Metal Sales, First Interstate Properties, and The Cleveland Police Patrolman’s Association. Also thank you to all the officers that assisted with this yearly event, and a big thank you to Captain Vytus Kijauskas for donating the boats, bait , and his time. 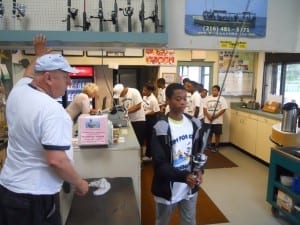