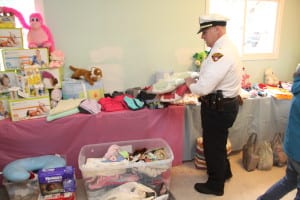 Commander Sulzer wondering where to put more of the incoming gifts on an already filled table. 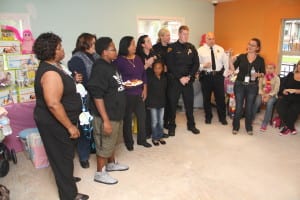 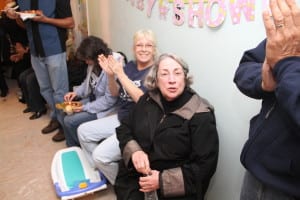 The crowd applauding for Helen Smith (pictured) who successfully petitioned against opposition of crisis nurseries 33 years ago, allowing for organizations such as Providence House to exist. 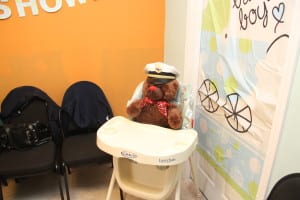 It’s a boy! Strollers were one of the much-needed gifts received at the Baby Shower Benefit.

The 13th Annual 2nd District “Baby Shower,” held on Saturday October 19,2013 to benefit Providence House, is another great story about how the members of the Cleveland Division of Police are involved in our community. It’s another example how the men and women sworn to protect our citizens pitch-in to make the quality of life in our City a little better in ways that might be considered more non-traditional policing methods.

The “Baby Shower” was initiated in 2001 when now retired 2nd District Sgt. Hughlean Medlea was jokingly rumored to be pregnant with twins after a random employee drug test. With Sgt. Medlea playing along, members of the platoon (shift) had so much fun they began to vote on which name to give the “babies.” Soon, personnel from the entire district joined in, and moral skyrocketed.

Hughlean decided to take it even further by throwing a baby shower to benefit Providence House. She regarded the work they do as critically important, as it is their mission to fight to end child abuse and neglect by protecting at-risk children, empowering families in crisis and building safe communities for every child.

The “joke” about Sgt. Medlea being pregnant was partially true, in that it gave birth to a wonderful event.

That first year, 2nd District officers collected donations, clothing, infant formula, toys, car seats and strollers, transported it all over to Providence House, and presented it to the staff. Seeing the impact of this gesture, and in response to the staff and client’s gratitude, the officers decided to make it an annual event.

While in previous years the “Baby Shower” was held at the 2nd District Station, this year it was moved to Providence House, 2037 W. 32 Street. It was the perfect environment for a baby shower. With its colorful walls and homey atmosphere, the tables and floor filled with diapers, formula, clothes, toys, strollers, and more brought a smile to everyone’s face.

Providence House Executive Director Natalie Leek-Nelson opened by thanking everyone in attendance and the 2nd District for their much-needed support. Hughlean Medlea, even in retirement, still is committed to the annual event she helped to start 13 years ago. She stated, “When we think about doing this event, we just get so excited.” Hughlean went on to say that while Commander [Keith] Sulzer may not have been the first district commander to take part in the shower; he was the first to truly buy into it.

Cmdr. Sulzer noted that at first, his reaction to the benefit was to support it, stating it was a great cause and “I’ve always been willing to try anything once.” However, “once” wasn’t enough. When support for the event seemed to diminish, he took the lead on re-energizing personnel. It’s now bigger than ever.

Donations this year came from all over including: Hughlean and her family in North Carolina & Colorado and several other retired CPD members formerly assigned to the 2nd District remain involved. Mores support came from active members of the CPD 2nd District, Howard Hanna, CPD Women’s Support Group, the Black Shield Police Association, and BJ’s Wholesale Club, which donated over $3,000 worth of diapers.

Editor’s Note: We commend everyone involved with this wonderful event and look forward to reporting on many others in the coming months.