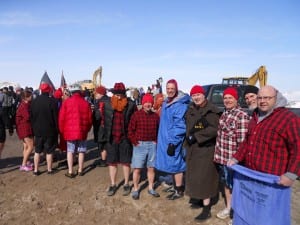 On a sunny, but very cold Saturday, February 28, 2015, Cleveland Police Captain Tom Tube led his team, cleverly named the Cleveland Policicles, into a frigid Lake Erie for the 19th Annual Law Enforcement Polar Plunge benefiting the Special Olympics Ohio. The event, sponsored by the Ohio Lodge of the Fraternal Order Police and several other local law enforcement agencies and organizations throughout the area. It was held at Breakwater Beach at Geneva State Park Lodge in Geneva-on-the Lake, Ohio.

They were joined by other teams and individuals from the law enforcement community across Ohio, and other supporters of Special Olympics Ohio. Each participant obtained pledges of donations from family, friends and coworkers. The Cleveland Policicles team raised over $4,200.00, and the collective effort of all the participants raised over $80,000.00 for Special Olympics Ohio.

thoughts as one the few defenses against the cold.

Congratulations and a hearty thanks to the Cleveland Policicles and everyone who volunteered to raise funds for such a great cause. Also, many thanks to all who made contributions through their pledges made to the participants