It was the perfect holiday story. In December, a six-year-old boy named CJ DeJohn, who suffers from a rare heart condition, saw his dream of being a police officer come true sooner than he could’ve imagined when he became police chief of the day, thanks to a local charitable organization. 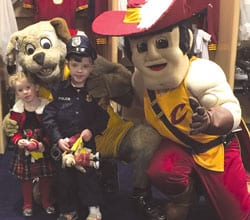 A Special Wish Foundation grants wishes of children diagnosed with a life-threatening disorder. The volunteer cofounders worked with the Cleveland police and FOX 8 news to orchestrate the day’s events which involved CJ being appointed police chief and cracking the case of a Grinch-like villain who stole presents from all of the city’s kids. The kindergarten boy saved Christmas in Cleveland.

“The idea stemmed from our first meeting with CJ,” says Jason Beudert, one of the founders of the Cleveland chapter. “He told us that he wanted to be a police officer when he grew up because he wanted to protect people. Well, that just melted our hearts.”

That dream-come-true story is just one example of how the nonprofit puts the “special” in their mission to grant wishes to children and their families. “I can’t say enough good things about A Special Wish,” says CJ’s mother, Whitney. “Jason and Eileen [Lane] have been so wonderful, giving us experiences that are priceless. They’ve been so generous of their time, they are a real blessing.”

Although the organization began in Columbus in 1982, the Cleveland chapter launched just two years ago, with Beudert, Lane, and Leslie Munsell, who serves as the executive director. While it is similar to the better known, Make-a-Wish Foundation, it differs in that it extends its services and wishes to qualifying children and adolescents from birth to the age of 21, rather than the standard ages of 2 ½ to 17.   Read more…