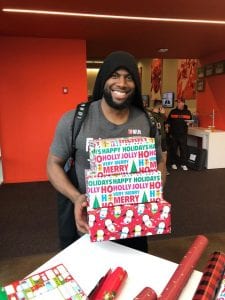 Darren Fells, Browns tight end, drops in to help out!

The Cleveland Browns not only have given Clevelanders one of the best Christmases in a long time with their victories, but they’ve also helped make our kids merrier for the holidays!!

Through the Cleveland Browns First and Ten movement, Browns staff members had the opportunity to support youth in the Cops for Kids program run by the Cleveland Police Foundation. Nearly ten Browns staff members from departments ranging from administration to finance, and special events to security were able to volunteer their lunch hour to wrap gifts for others for this holiday season. Those with gifts could stop by during the two-hour block to deliver their gifts to be wrapped for a donation, knowing it would go to a good cause.

While there were only three set organized times to get things wrapped, lead volunteer and head elf RJ, a member of the security team (the one who came up with the idea), availed himself throughout the week. RJ encouraged both staff and players to stop by his office with their gifts, big and small, and a cash donation to support Cleveland Cops for Kids.