Arica Sims Explorer of the Year shown with her Mother PO Anna Mercado and Grandmother. 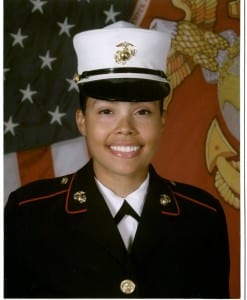 The Law Enforcement Explorer Program is a career development program for high school student interested in a career in law enforcement and run by the CPD Bureau of Community Policing. Each year, approximately 20 students participate, and it’s has an amazing track record of developing good citizens, future police officers, and for those opting other career paths, ambassadors who understand policing in the City of Cleveland.

One of the recent success stories is former Explorer Arica Sims…. now a United States Marine. Arica was participant in the LE Explorer Program for five years, the last two as Class President. She recently graduated form the United States Marines Boot Camp at Parris Island. She credits the Cleveland Police Explorer program with helping her meet her personal challenges of high school, and after graduating from the program, entering the Marine Corps. During her involvement, she received the Explorer of the Year Award and honed her leadership skills which we’re sure will help her in her military career. She was also tops in her high school graduating class.

Arica said, “The Explorers is an amazing program.  It has taught me everything from teamwork to self-discipline. The program was a great help to me as I went through high school and Marine Boot Camp. It gave me a respect for authority and self-reliance.  It taught me leadership skills. I know my experience in the Explorers will always be of great benefit to me, now and in the future, whatever profession I plan to pursue.”

Bureau of Community Policing Commander Ellis Johnson stated, ” Arica was always one of our most determined and dedicated members. She is a very special person and will go on to do a lot of great things.”

Editor’s Note: Arica is one of many success stories resulting from this program. Others will be featured in future editions of “The Partner.”