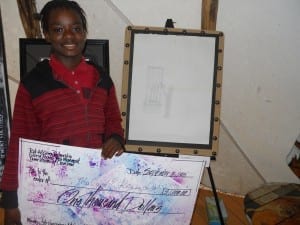 The Cleveland Police Foundation is proud to announce we have partnered up with the Rid-All Green Partnership Urban Farm located at 8129 Otter Road in the 4th District. In conjunction with this partnership I was invited along with Executive Director, Chas Lane of the foundation to the Anti Gun Violence & Art Competition held on 9-12-15 at their location. This competition stemmed from a toy gun buyback held earlier in the year and the participants were encouraged to enter a drawing, painting, or sculpture in connection with this event. At the buyback each family that turned in a toy gun received a $25.00 gift card from Dave’s Supermarket, and comic books. A good crowd turned out despite the rainy weather to support the 18 adults, and children that provided the excellent entries. The three winners in the following categories each received a check for $1.000.00 and they were:

Sculpture
Winner – Gadi Zami                     Titled – The Only Gun Allowed In School
Painting – Age 18 & older
Winner – Thomas Hudson           Titled – It Starts With A Change In Attitude
Congratulations to all the participants, and their supporters, and a very special thanks to Captain John Sotomayor, and the officers from The Cleveland Division of Police that attended. On behalf of The Cleveland Police Foundation I want to thank the Rid-All Green Partnership for inviting us and we look forward to working with you in the future. Another toy gun buyback is scheduled for sometime in October, with the exact date, and time to be announced.