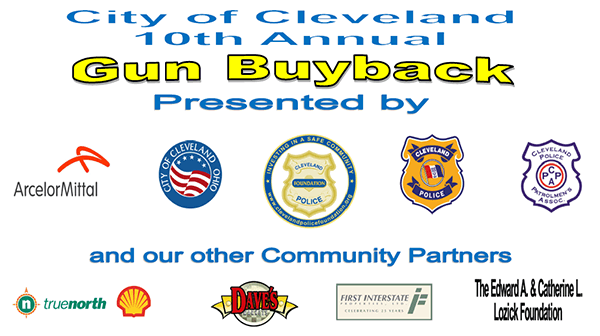 Mayor Frank G. Jackson and Chief of Police Calvin D. Williams proudly announce that the 2016 City of Cleveland Gun Buy-Back will be held on Sunday, December 4, 2016, at the Third District Headquarters at 4501 Chester Avenue. In exchange for operable handguns or semi-automatic weapons, citizens will be given a either a $100 (handguns) or $200 (semi-automatic weapons) gas or food gift card.

“The annual Gun Buy Back allows us to partner with the community to take guns off of our streets,” said Chief of Police Calvin D. Williams. “Programs like the Gun Buyback save lives. We are proud to once again participate in this and appreciate the sponsorship provided by the
Cleveland Police Foundation, ArcelorMittal and Dave’s Supermarkets. Without their support, this would not be possible.”

“ArcelorMittal is proud to partner with the Cleveland Division of Police on the gun buy-back program. It is a natural extension of our commitment to make Cleveland a safer place for our employees and neighbors. After the guns are collected, we are pleased to melt down the weapons and recycle them into new steel which will eventually become consumer goods that improve the quality of all our lives,” said Eric Hauge, Vice President & General Manager, ArcelorMittal Cleveland.